EARTH RELEASE SERPENTINING GUITAR EPIC “THE MANDRAKE’S HYMN”The legendary duo’s ninth studio album, Full Upon Her Burning Lips, is out now on Sargent House. // Catch them tour with Helms Alee in May & June. 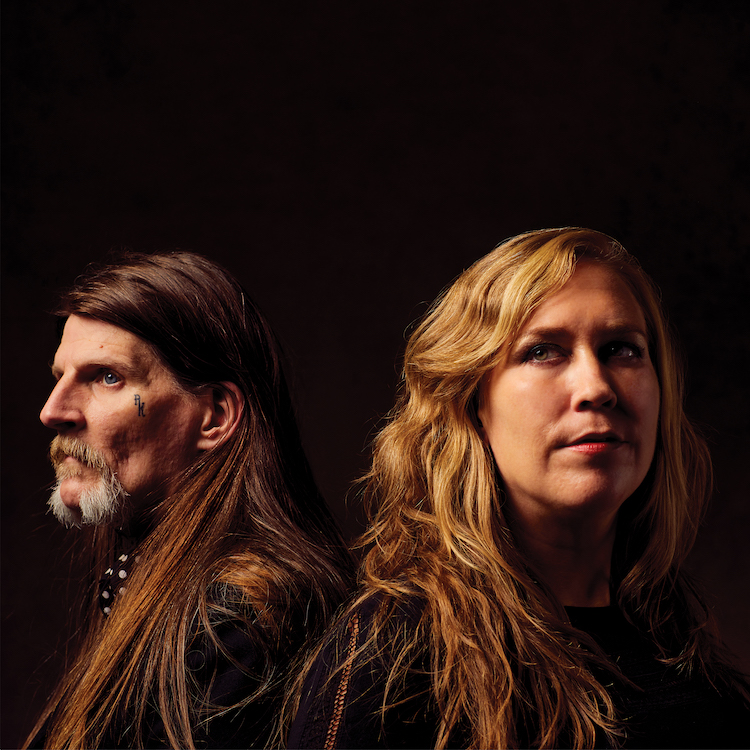 With the release of their ninth album approaching, monolithic minimalists Earth have unveiled yet another piece of theFull Upon Her Burning Lips puzzle. “The Mandrake’s Hymn,” a dusty, Morricone-tinged five minute epic, is a masterclass in melodic restraint and unassailable skill.
Listen to Earth's “The Mandrake’s Hymn” via Guitar Mag today (or directly on YouTube).
Over the course of their thirty trips around the sun, Earth have remained steadfast in their commitment to minimalism. While their sonic vocabulary has morphed over the years, their loyalty to stylistic substance has remained incontestable. With Full Upon Her Burning Lips, the duo is at its most inquisitive, resulting in more terse musical vignettes unbound by context. Coming together in bits and pieces, the album’s ten tracks freely roam beyond time, space and narrative.
Engineered, mixed, and mastered at Studio Soli, longtime associate Mell Dettmer helped harness, shape, and document the songs in a manner that highlights the depth of Earth’s sparse components, capturing hidden dimensions much like the veiled images residing in the Magic Eye prints from the ‘90s. The LP is the purest distillation of Earth yet, and indeed, anyone that’s followed the duo on their journey will bask in the unadulterated hums, throbs, and reverberations conjured by Carlson and Davies.
Full Upon Her Burning Lips will be released on now via Sargent House. Preorders are available here.
See Earth on tour across the U.S. with label mates Helms Alee this May and June.
Full Upon Her Burning Lips — Track Listing:
1. Datura’s Crimson Veils
2. Exaltation of Larks
3. Cats on the Briar
4. The Colour of Poison
5. Descending Belladonna
6. She Rides an Air of Malevolence
7. Maiden’s Catafalque
8. An Unnatural Carouse
9. The Mandrake’s Hymn
10. A Wretched Country of Dusk
Earth — On Tour w/ Helms Alee:
May 24 Seattle, WA @ Neumos
May 25 Portland, OR @ Doug Fir Lounge SOLD OUT
May 26  Portland, OR @ Doug Fir Lounge
May 28 San Francisco, CA @ Great American
May 29 Los Angeles, CA @ The Echo
May 31 Los Angeles, CA @ The Echo
June 1 Phoenix, AZ @ Rebel Lounge
June 2 Albuquerque, NM @ Sister
June 4 Austin, TX @ Barracuda
June 5 Dallas, TX @ Club Dada
June 7 Houston, TX @ The Secret Group
June 8 Baton Rouge, LA @ Spanish Moon
June 10 Orlando, FL @ Wills Pub
June 11 Atlanta, GA @ The Masquerade
June 12 Carrboro, NC @ Cat’s Cradle
June 14 Richmond, VA @ Gallery 5
June 15 Baltimore, MD @ Otto-bar
June 16 Philadelphia, PA @ Johnny Brenda’s
June 18 Somerville, MA @ ONCE Ballroom
June 19 New York, NY @ Le Poisson Rouge
June 21 Pittsburgh, PA @ Spirit Hall
June 22 Detroit, MI @ El Club
June 23 Chicago, IL @ The Empty Bottle
June 24 Minneapolis, MN @ 7th St. Entry
June 27 Denver, CO @ Marquis Theatre
June 28 Salt Lake City, UT @ Urban Lounge
June 29 Boise, ID @ Neurolux