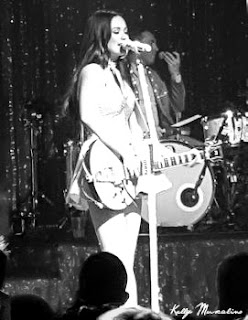 Having spent years listening to hip hop, rap, and hard rock I decided to get my girlfriend tickets a few weeks back for her birthday to a whole new style of music. No, it wasn't an opera or a death metal fest, it was a country show. I had never seen a country singer live like this before. Kacey Musgraves an up and coming country pop artist was the act of the evening. For myself, this was an odd place to be. I was there in support for Kelly than anything, but I would soon be taken back by the sounds and show this young artist put on. The first act John and Jacob hit the stage and really put on a show. As their set was midway the crowd was growing and growing. I was surprised how quickly the venue filled up. The crowd began to see almost in sync with each other, swaying back and fourth as the opening act came to a finish.

It seemed as if an hour had passed, the crowd became impatient yet waited. An announcer came onto the stage and announced Kacey Musgraves would be hitting the stage. The roar from the crowd of mostly woman was one of the loudest I had ever heard. The light dimmed and the shimmery backdrop, and cactus light up.  The show began. Her first song went well, and it impressed me so we nudged closer to the stage. I wanted to grasp the concept of Country music and this seemed like on of the best chances I would ever have. Kacey stopped before the second song apologizing to the parents in the crowd for her language, which I found amazing and then continued. Her band kept up with her and the show went on! Mid-set they did a talent show with balloon animals, juggling and more. They really kept the crowd going. Song after song she managed to personally relate to each and every member of the audience and they loved it.

She began to tell story's and explain each song. Going back to when she was 6 years old in a talent show at one point, she really could relate to her fans. The venue made a great choice booking her and she rocked the stage. By far one of the cleanest venues and best show I have ever been to!
Kacey Musgraves UG Magazine Underground Interviews Underground music