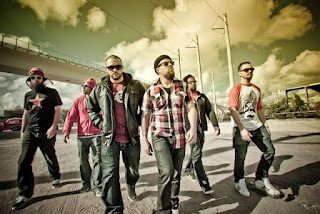 Our team has spent the majority of the last three years interviewing and writing about artist. We have traveled the nation, and covered shows all over the world. We have worked in hip hop, country, edm, rock, metal and much more. We have seen artist at all levels of the industry. One of the best memories recently was the !MAYDAY! show at Mojoe's now the Tree of Joliet. As the night started we set up the merch tables and slid into our seats. The show began, one artist after another entered the stage, and then our performers, Smokem Records. Randy, Mike and the team rocked the stage. As their set went on their music got more and more intense. Once they finally finished, we slipped into a
corner and went over the plan. I want an interview with !MAYDAY!. Another artist we were working with big Truck was also doing security that night. As the show came to the last set, I got a bit excited. I'm usually very professional at shows, but !MAYDAY! had truly been a new hidden favorite of mine.  This being their first stop of the tour they were starting, I had expected a great show. Bernz and Wrekonize tore the stage up song after song. Bernz stopped a few times to take a splash of Jack Daniels as the show went on.

About an hour and a half went by and up came the last song. I personally loved the song, and knew immediately what was coming. " Where do I start, I have more lives than I can count, Had one to many all nighters, out here surfing these crowds" the crowed went wild.  People began filling in the front of the stage and the crowed began to sing with the artist. In almost less than a second you heard 800 voices singing " Better get yo feet wet, I'm treading water in the deep end, I'm trying to kill off all my demons, embrace my flaws and all my defects, my short cut's and dead ends, dead ends". The song rang through the venue shaking the walls. As the song ended the crowed screamed, and off went !MAYDAY!. It was like a dash to a finish line 2000 miles away to get to the front of the crowed.

I saw Big TRUCK from the corner of my eye leading Bernz down the stairs and into the crowed, Bern began shaking hands and signing autographs. Big Truck motioned me over to the center of the room, and I walked over. Hey Bernz man this is Brandon from Underground Interviews, Truck said. Hey Brandon Bern replied, let's go talk. Bernz lead me and my team up to the vip section and we sat at the bar. Before beginning the interview,we all sat and enjoyed a cold Honey Jack shot with Bernz. After finishing our interview, we kicked if for almost three hrs with the whole !MAYDAY! team and relaxed. The group is by far down to earth and very easy to work with!